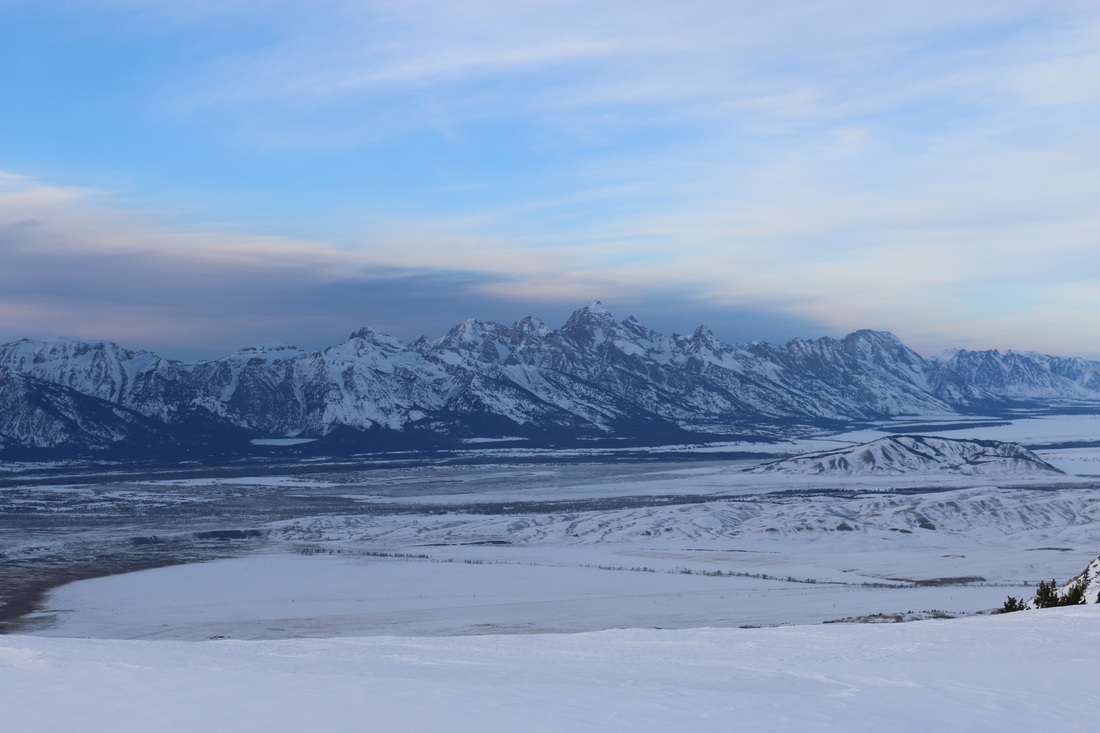 Only a mention from a friend evoked our journey to the elusive Jackson ski cabin. We didn’t need to ask questions, the cabin is so special that even the forest service couldn’t bear to tear it down when the Gros Ventre Wilderness was established in the 1950’s. From our shelves flew gear for whatever the trip might throw at us;  big packs, -20 degree sleeping bags, camp cooking gear, solar power, split-boarding equipment, rescue essentials, a good ol’ flask of whiskey and other adventure supplies.

The clock was ticking as we met our crew at the local snowmobile shop late in the afternoon. The decision to tote snowmobiles from Utah for the 10 miles they would trim off our trek would be one of a bitter sweet variety. Just outside of Alpine, WY the sirens sounded, blue and red lights reflected off the steep snow banks, and a police officer approached from the left. Yoda, our Norwegian Elk Hound puppy, barked at the intruder as he asked about the burnt out tail light on our trailer. The compromise the officer so creatively drummed up was for us to run our sleds idling on the trailer so that their tail lights would supplement the lack of the trailers'. When we finally parked at the trail head in the GrosVentre National Forest it was Midnight.

Sub-zeroFebruary cold nipped with warning while we unloaded and warmed up our machines, zipped our packs, and tightened our boots. The beams of light from the sledsbarley pierced the huge Wyoming wilderness blackness. Slowly the trail faded until we came as far as the terrain and the wilderness would allow. We slapped on our skins, pressed on our head lamps, reluctantly shed a layer, and ventured into the darkness, blindly trusting the GPS. 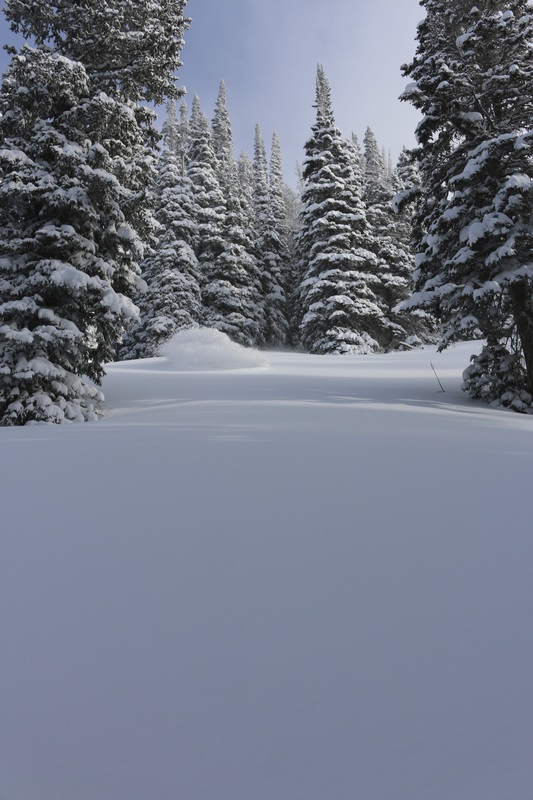 The new moon and clear skies offered us a stunning view full of shimmering stars. The only other thing in sight was Yoda's paw prints scampering on over and all around the untouched snow. The scope of time is nearly impossible to tell as we felt our way through the darkness, sliding up the mountain side on our skins. My focus became tunneled by the reach of my 100 lumen head lamp. The snow conditions varied and we encountered patience testing breakable crust, sinker deep, and un-edgeable solid snow as we ascended into a foreign, frozen, vastness.

The howling wind near the ridge put up a big red flag for dangerous slabs so we took shelter in a alcove carved alongside a cliff and attempted to warm our numb cheeks. A look at our GPS location also reviled that we were on track and that it was 4 o’clock in the morning. The time was shocking to us all and the consideration of burrowing into a snow cave seemed like a tempting option to me. But we pressed on ahead because we knew that out there in the forest was a warm shelter, so inviting that my slap-happy mind could only barley imagine it. 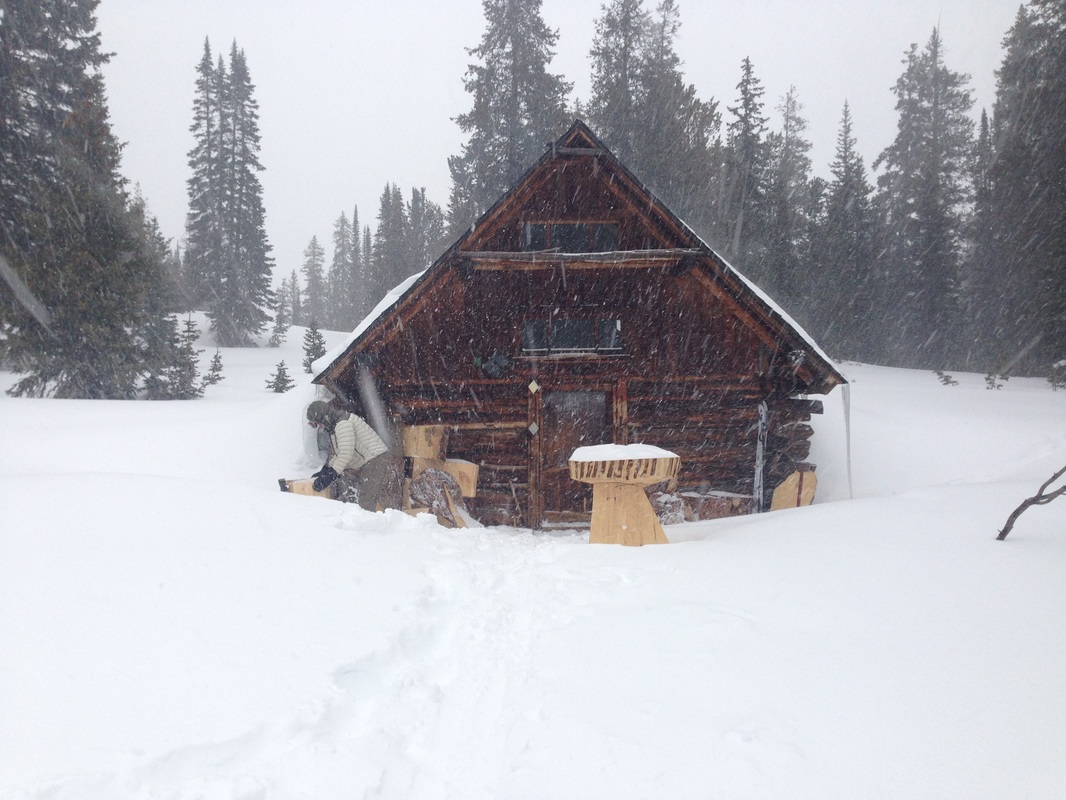 5:30am and we skinned into an open field of sparkling snow surrounded by huge Douglas fir trees and nestled right in the center a inviting, hand built log cabin. The Jackson Ski Cabin was built by the Jackson Ski club back in the 1950’s before the GrosVentre wilderness became a part of the national forest. The amazingly crafted, hand sawn, Lincoln log style cabin captured the hearts and imaginations of the forest rangers and it was decided that it would be protected and  stay as a retreat for the adventurous.

We went right to work splitting wood and got the fire cranking in the god-sent wood stove. We took our boots off resulting in a glorious “boot-gasm” because after five and a half hours skinning in sub-zero temperatures, it feels damn good. Yoda curled up in a ball as close to the stove as he could get, tucking his paws under his chin. Kordell was alarmed to the lack of feeling in his big ring-tailed black and white toe and Josh’s feet stung due to the snow packing inside his ultra-light rando ski boots. Zach and I felt fortunate to have put some heat reflective foot-beds in our snowboarding boots, saving our toes from the bite. A toast of whiskey celebrated our arrival and we filled up the half log stairs, laid out our sleeping bags in the roomy loft, and slept till noon. 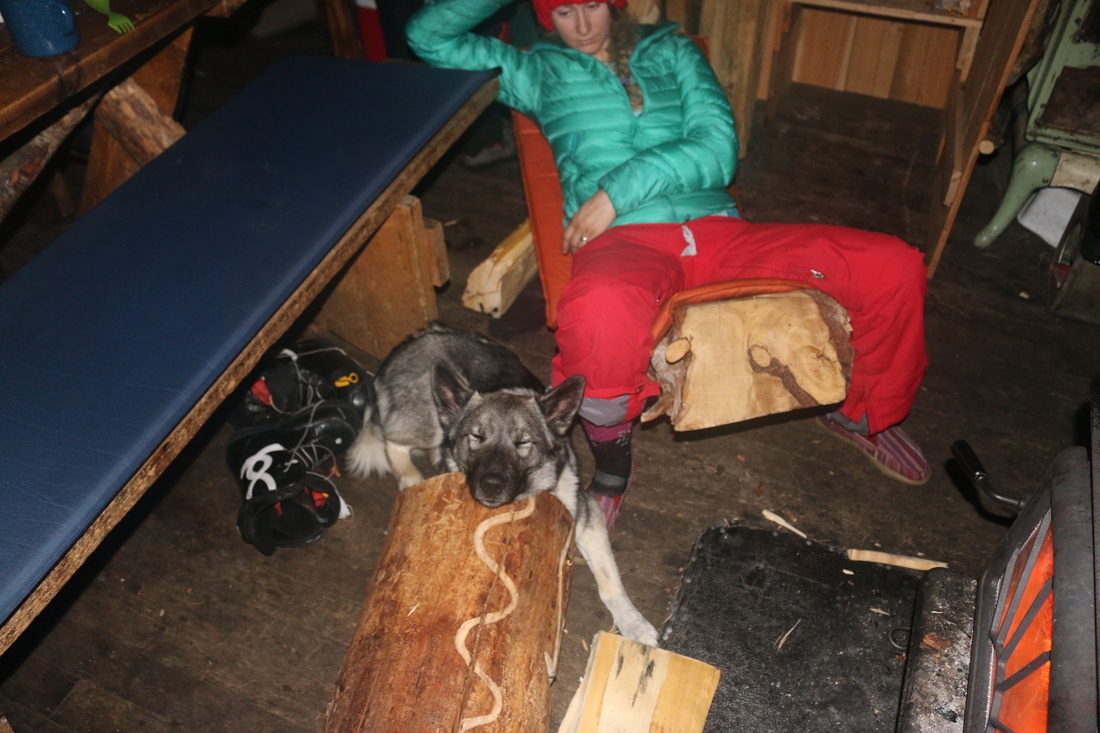 Later that day  we went out to explore Jackson Peak. This summit rises above the cabin located in the national elk refuge and is also positioned perfectly to the east of the legendary Tetons giving us a tantalizing view of future adventures. We all felt good about the stability of the snow pack and were excited to ride from the picturesque pyramid shaped peak. We lined up along the ridge selecting different east facing lines. The snow swooshed as the untouched re-crystallized powder sprayed into the air with every slash of our boards. We then dropped out of the alpine and through the huge evergreens and back to our sweet base camp as the sun turned orange and melted into the horizon.

The next morning we were awakened to a foot of fresh stacked snow and the storm wave dumping powder would continue relentless for the next two days. After a bleak and dry start to our season in the Wasatch, we took on the new fluffy snow with the giddiness of littlekids as we broke a trail back up to Jackson ridge where the trees acted as anchors to hold it all in place. Lap after lap of clean fluffy slashes kept smiles on our snow covered faces. The incredibly crisp, cold temperature kept the powder perfect but Josh and Kordell had to give in to the pain in their frost bitten feet and headed back to warm up in the cabin below. Zach and I continued climbing then riding fresh lines with deep landings run after run until the light in our white clouded atmosphere dimmed to dark. 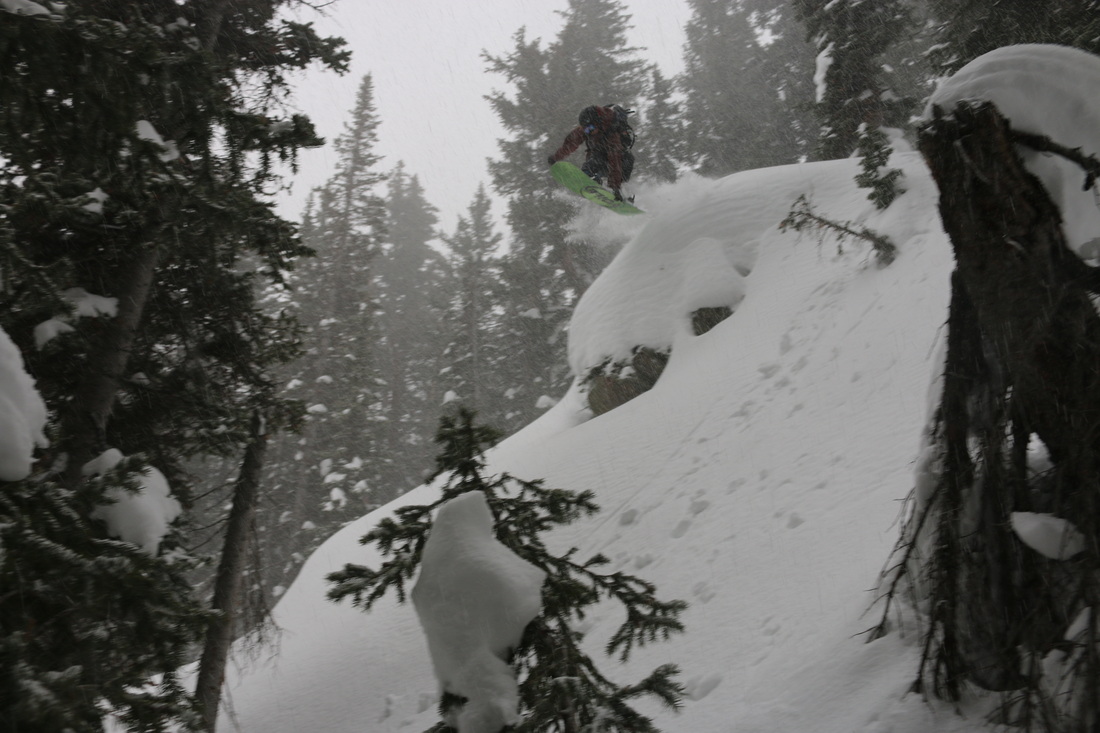 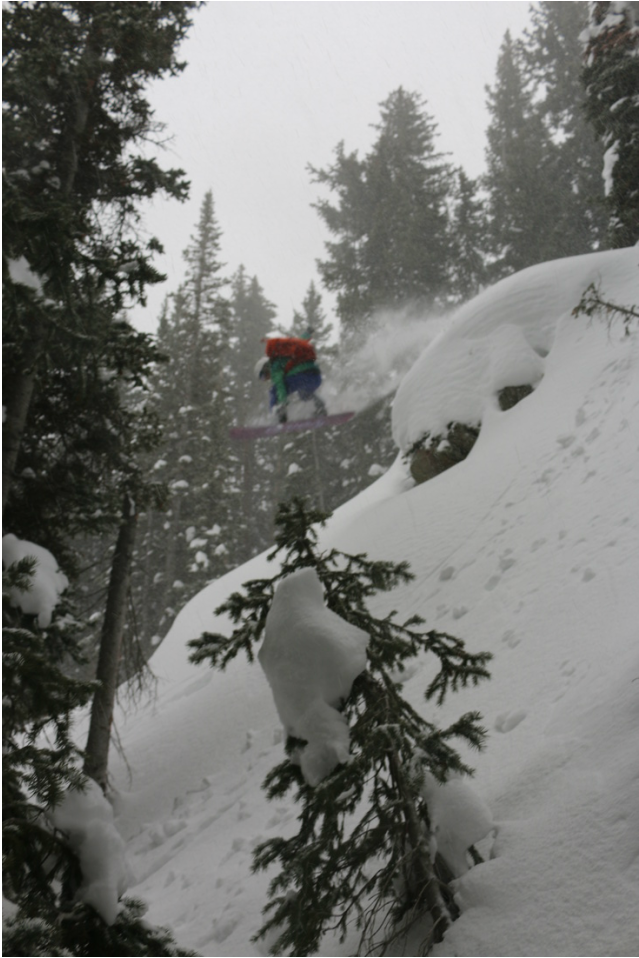 We arrived back to camp to see that Kordell and Josh couldn’t help the powder fever and had headed over to a different nearby stash. Our puppy Yoda had been left at the cabin to recover from the previous voyage but had managed to escape through the slightly ajar door. He came bouncing through the snow like a bunny with a waggling tail and a mouth full of snow to greet us. We chopped some more fire wood and hung our our damp gear to dry above the roaring fire. Some dinner, some warming whiskey, and we soaked up the beauty inside this gem nestled deep in the snow covered forest. We read the log book and found it was full of grateful travelers, respectful guests, and an overwhelming feeling of enchantment with the space. The apposite paintings, messages, and antique hand tools all possessed their own stories of the beloved cabin in the woods. We quickly felt the connection to the space and started to understand the sentiment.

Snow continued to flutter out of gorgeous fluffy clouds and our terrain felt limitless as our tracks were ever refilled. On our final day we knew the avalanche danger had risen substantially with the abundant new snow and a conservative exit would be our goal. We skinned through trees and flat rolling terrain until we reached the bowl between us and the final ridge we needed to return across. As we stepped out from the tree line, a soft slab avalanche sympathetically pulled out 150' wide and a foot deep on the 800 foot slope immediately above us. Shaken by what we had witnessed, we checked our pants and I tied Yoda’s leash to my waist belt. I lead an ultra-careful route up the lowest angle approach available, tree to tree, one at a time, until we crested the ridge with a sigh of relief. 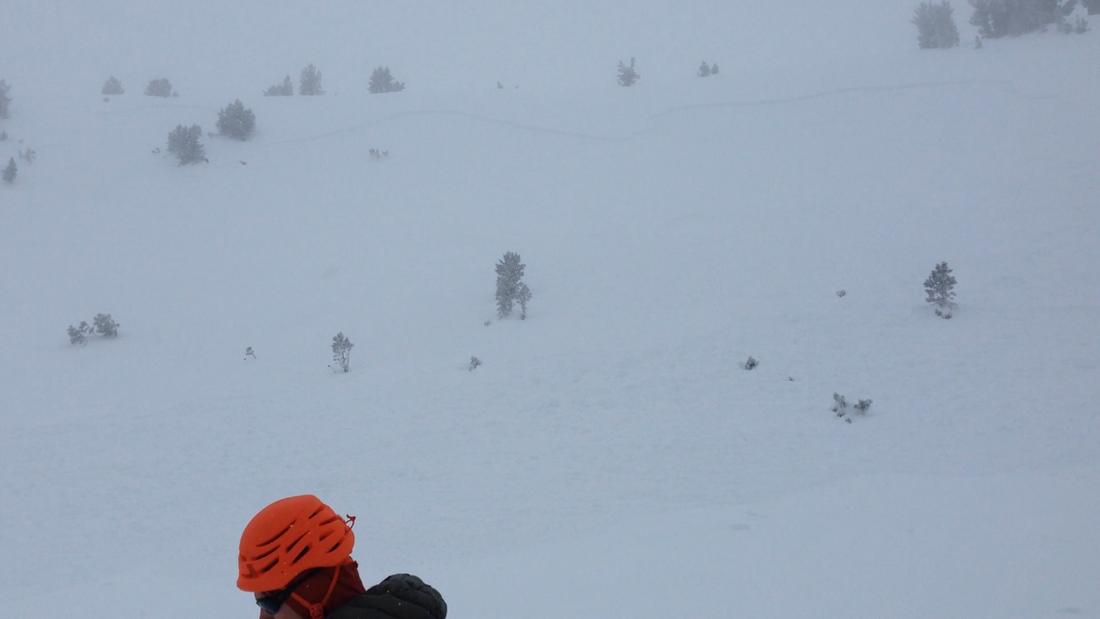 We found some manageable, heavily treed terrain on the other side and rode down a couple thousand feet of blower powder into Cache Creek. A little bush whacking and river crossing put us right back where we started, and where our snow machines sat buried like inconspicuous lumps of snow. A quick zip back to the truck and we drove into Jackson Hole for some fresh Thai food. Looking back toward the wilderness from the safety of the truck, we hit the road back home with another priceless experience morphed into memory.