In early April Zach Grant, Kelly Gray and I set our sights on the jagged granite peaks of the Tordrillo mountains, a sub range of the massive Alaska Range. To put the scope of this place into perspective, the range could cover the entire state of California. Pin pointing the location we wanted to snowboard was a daunting task full of digital maps, paper topographic, and aerial photography. Coordinating with the pilot is what finally set our routes into action. We loaded our gear into their beautiful chrome beaver bush plane. We had a lot in common with our pilot Ben; 26 years old, loved to ski tour, and made a living doing what he loved. When asked he said “because in Alaska people either become fishermen or pilots.” He flew us around until we made a group decision on a safe camp spot. We then flew through a tight col and made a spiral descent onto the glacier.

We touched down but didn’t feel a thing; he pulled back up upon the realization that the snow was too deep. He would have to beat in a landing zone with a couple passes. Once stopped, the first steps out of the plane seamed like they belonged in a fairytale, waist deep fluffy snow! We staggered along a boot pack to pass gear along assembly line style, out of the plane and away from the newly formed runway. Ben had to make a few more circles on the runway to pack it down for his return 9 days later. Each lap threw up a huge powder spray from the plane and then he was gone.

We laughed as we stomped out our camp and made flat spots to set up our tents. “Is this real? Someone please pinch me!” We were surrounded by powder-coated spines, long steep couloirs, brilliant blue ice, and sharp golden peaks. With camp set and the sun fading we crawled into our tents under a sky full of stars. 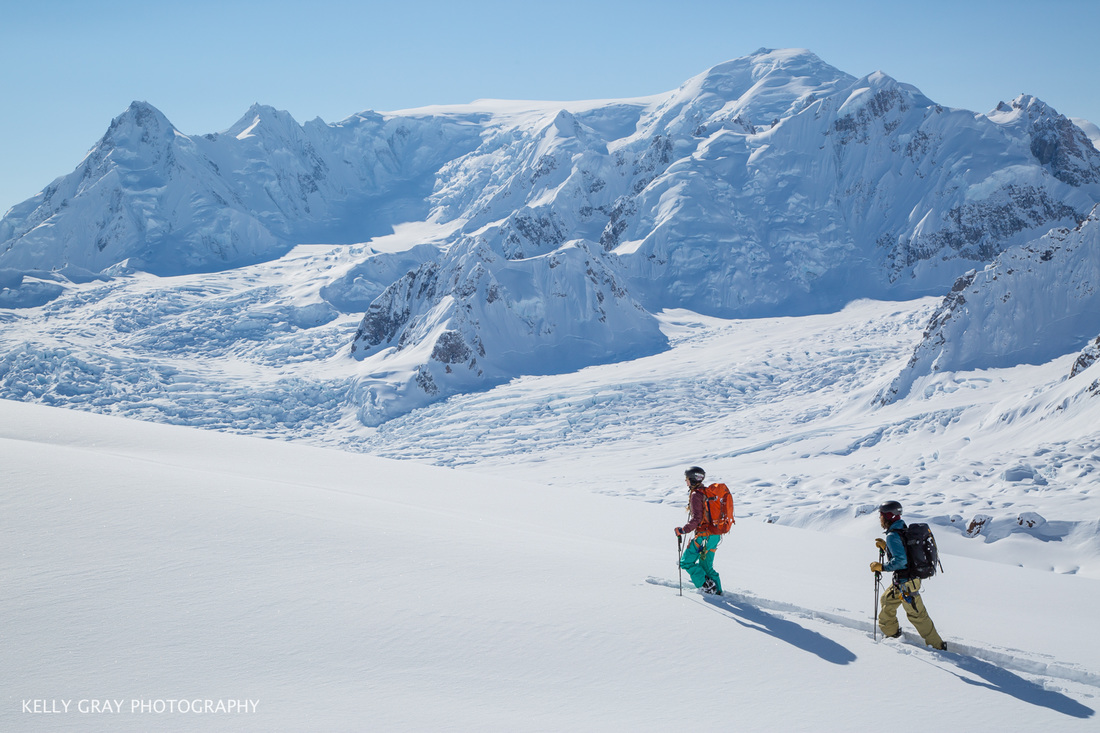 We woke up with wonderment at our surroundings. The glacier we had made home deserved some exploring so we roped up and started our approach to the mellowest point of the steep mountain face. With all the new snow we knew that deep crevasses could be lightly covered and so we aimed at higher points and linked the safe points together. The ascent route we picked was a runnel between two spines and all the natural shedding of loose snow into it made it consolidated enough to pack steps into. Just under the bergschrund, where the moving glacier ice meets the stable slope, we assessed the snow pack and were delighted by the stability.

We used our splitboards as anchors to hang on to as we built steps by packing snow with our feet. We took turns booting strait up the face to set the track and our views improved the higher we ascended. We were getting close to the top and it was my turn to take the lead. I pushed upwards until I came to a thin rocky section and where I lost my footing. A panicked feeling shot through me as I fell up to my hips into a rock hole 1500’ above the valley floor. I shakily pulled my self out with my board and used the freshly circulating adrenaline to finish the top out.

Once we all got on the top of the ridge we were greeted with expansive views of the range. Our base camp valley, that seemed so huge, was dwarfed by this expanse that was laid out over endless miles of glaciated peaks. We discussed the lines that we wanted to ride, picnicked on the ridge and made a plan to get some photos. After building a platform, I strapped into my board on top of an untouched spine loaded with powder. Zach dropped first and his exhilaration with every turn played out in big sprays and loud slough on either side of the spine that he stayed perfectly on top of. 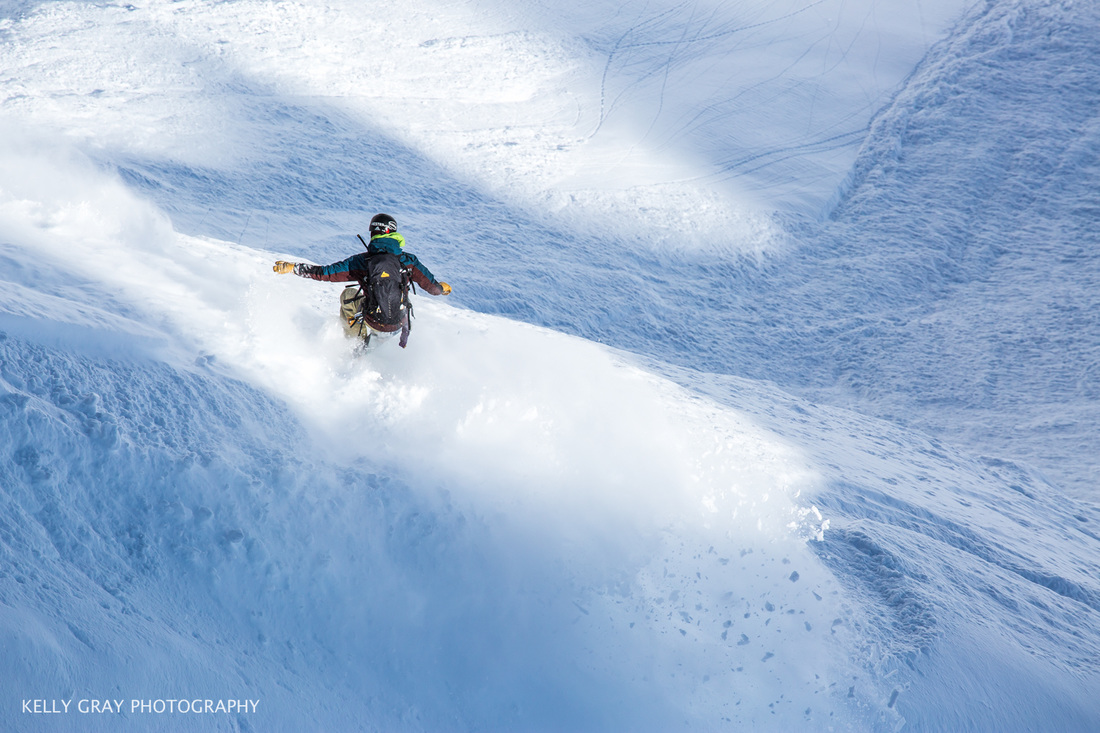 We went back to the spine wall for three sublime days. The slough calls were mandatory, the drop ins were thin, but the meat of the spines were pristine, deep, and surreal. We all had the best lines of our lives. We were all laughing at the bottom of the slope with hearts filled with the pure ecstasy. As we carved our turns into knife ridge spines the range of feelings was vast. There was the nervousness on top, the silence in that first turn, the pure connection to that moment, fully in tuned with focus, and the almost overwhelming elation from the run out.

I couldn’t get enough. Then, I got spanked; the line I picked didn’t go from the ridge and required a short traverse to get on to. As I crossed the slope a sharp rock grabbed the base of my board and all of the sudden I was in a full tomahawk, falling feet over head. Stunned, I was able to get back to my feet and point it for the spine. Not reaching it before I was taken down by my river of slough and dragged to the bottom and over the bergschrund. My confidence was crushed and I kept looping the thought that I knew better, that I was better. After a solid session of self-doubt and criticism about my mistake, I pulled my self back to my feet. I changed my outlook knowing I was incredibly lucky. I wasn’t critically hurt, I wasn’t in a deep dark hole, and the conditions I had been riding couldn’t have been better. I decided to be grateful for the lesson that I gained from my experience and I climbed back up to ride another line. 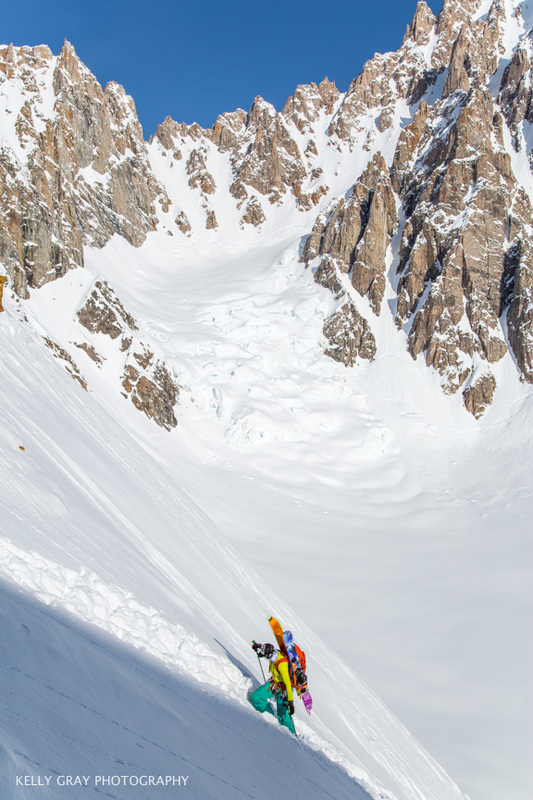 That evening we got a text form Kelly’s wife Sarah with a weather report for the Cook Inlet. Partly cloudy - scattered storms. The Cook was 60 miles away but it was the closest place that was forecasted. We decided to start building a snow cave to move our camp kitchen into. We were on a flat glacier and it required us to dig down, in, and then up to build it properly. Our backs were sore when the sky went dark with milky clouds overhead. With enough room to protect our stove and food, we went to sleep.

I awoke to the tent wall slapping me in the face from the howling wind. We had built a wind wall for down glacier winds and the storm was violently moving up glacier. Franticly we got out and attempted to build a wall before we lost our tent. At one point I had my heals planted into the snow against the wind and I was pulling the guy lines with all my body weight to counter the force. Zach tried to build blocks that would instantly get annihilated and blown away. After awhile of this seemingly hopeless chaos an idea popped into my mind. We dumped all the food out of the plastic totes into the cave and shoveled snow into them as forms like I had done while building an igloo back home. Our solid block wind wall went up quickly and became a huge morale boost. A 360 degree, five-foot wall went all the way around our tent as a result.

Dinner in the cave kitchen was peaceful and the shelter from the storm was welcome. It was so quiet inside that it would mess with my mind. The light coming down the entry tunnel almost looked like sunshine and I would go to check only to find the storm still raging. Our primary two-burner stove had sprung a leak and we were fully reliant on our only single-burner back up stove for making dinner and water melting, a tedious task.

I lost track of the back to back survival shoveling days and although we were sore, after a time, the pain blended into it all. It was snowing up to 4-5 inches an hour when the snowing would peak, a rate we didn’t know existed.  At that point we would get up in 3 hour intervals during the night to shovel so that our tent wouldn’t collapse from the pile up. We even built a half igloo we deemed the shit-gloo after too many occurrences of frozen asses and snow filled pants. The wind wall we were so proud of soon became an endless pit to huck snow out of.

There were a couple of nights that I will never forget and none of us slept. We could feel the vibration as a natural avalanche cycle poured off the peaks around us. We heard over 20 large natural avalanches in every direction. Although we had picked a safe camp spot, it all came into question when the entire drainage started ripping loose. The thought of sleeping with my beacon on occurred to me but would have only been useful in body recovery had we been buried.

One morning I awoke in a puddle, my inflatable sleeping pad had gotten progressively worse through out the trip and now it was simply flat. A minimal closed cell pad was the only thing stopping my sleeping bag from being soaked with the melted snow we had tried to keep out. I started to pack my gear so that I could transfer it to the cave and get the water out of the tent.

Suddenly the sun poked through the white abyss. The more I packed the more the clouds cleared and we got a satellite call out to our pilot promptly. He was leery of bringing the big beaver plane that would fit us all because the snow was so deep. His decision was to fly the beaver into the Tordrillo Mountain Lodge 60 miles away. From there he would fly a small one passenger cub that was lighter and had less of a chance at getting stuck in the deepness.

As a side note, he informed that a climbing team had been in the same storm but all their gear was blown away. They survived on one stove to melt water and one meal for 3 days when the military extracted them with a flight-by-instrument (no sight) helicopter. Our scenario wasn’t so bad. It ended up being 3 days of glory and 6 days of surviving. A pretty good Alaskan ratio if you consider all the stories of people getting skunked with only storm days.

Ben flew in and wanted to extract us one at a time with our gear. After some argument I refused to leave Zach alone and so Kelly went first. As soon as they flew away the clouds rolled back in. Zach and I prepared to sleep inside the cave for the night. An hour later we heard the buzz of the engine! He landed with little visibility and wanted to take me out. Again I refused to leave Zach alone in case the storm got worse and he couldn’t get back in. Instead we pilled our gear up in the snow and put a GPS waypoint on it. Zach climbed into the passenger seat and I crawled into the cargo compartment to sit facing the back of the plane. With a sigh of relief, we flew off into a cloud shrouded pink sunset.