​After driving 7,000 miles in pursuit of our dream lines on a record breaking snow year, we found that the round trip drive from Utah to Alaska was not for the faint of heart. With a loaded truck and a pop-up camper in tow, the drive had no shortage of adventure....We endured negative thirty degree temperatures, three flat tires, white-knuckle driving conditions, and ice road truckers that sprayed us with gravel as they passed at eighty mph. There was a stunning sense of vulnerability in our endeavor. We spent nights with Yukon dog packs, camped out in parking lots waiting for antiquated gas stations to open, started a life-long coffee addiction, and met all kinds of people living in remote and far flung locations. That season was deep at all elevations in AK and we were lucky to align our first voyage with ideal conditions. The following year, Zach and I decided we would fly instead. We loaded all of our gear into the snowmobile sleigh, hauled it from our snow-bound cabin to the car, dropped off our six-month old puppy with family, and made the forty minute drive to Salt Lake City International Airport. We put all of that desire for adventure into the Alaskan splitboard backpacking mission we were about to embark upon. 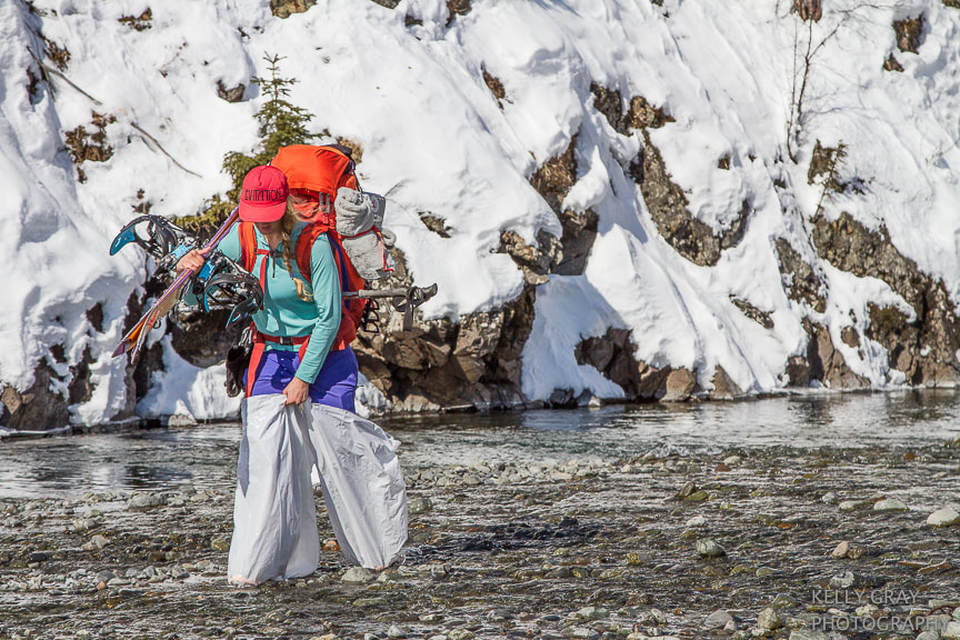 As we flew into Anchorage, we were greeted by Alaskan local Kelly Gray. Like us, he grew up in Utah and decided to follow his northerly instincts as he pursued helicopter ski guiding in Cordova, Alaska. Having the knowledge of a local can make all the difference on a trip to new places and we would not have been nearly as successful without our trusted friend. For years, we talked about our dreams of riding the legendary Alaskan spines and his relentless encouragement made our lofty hopes a reality. Kelly’s guiding career morphed into an even more successful photography profession as he moved into a beautiful canyon in the Chugach Range called Eagle River with his wife Sarah and his four year-old son Kye.

As we drove into the canyon, the opening was plagued by urban sprawl and we passed a series of marts and strip malls that were trying to bring American convenience to a wild Alaskan landscape. We drove higher and further until we arrived at the upper, more remote reaches of the canyon where Kelly had built a beautiful cabin we dubbed “The Taj Mahal.” The home was complete with an airstrip in the backyard, as is common in Alaska, and hand-collected river rocks lined the base. The inside was refreshingly open and full of natural light as we awoke to incredible alpine views of the peaks and chutes we were preparing to ascend. On those mornings, the big 360 degree windows of the great room acted as our lens as we made lattes and eggs.

Seeing it all in the alpine glow of sunrise elated us and we excitedly stuffed our forty-five liter Gregory ski packs as if they were seventy liter packs. Winter camping requires more; more layers, more food, more fuel, and in turn, you have more fun. You then top it all off with all the tools necessary for splitboard mountaineering on glaciated terrain and not one strap goes unemployed as the weight stacks up. Add in a four season tent, negative twenty degree sleeping bag, and crevasse rescue gear. Needless to say, we packed and repacked it all into place Tetris-pro style. 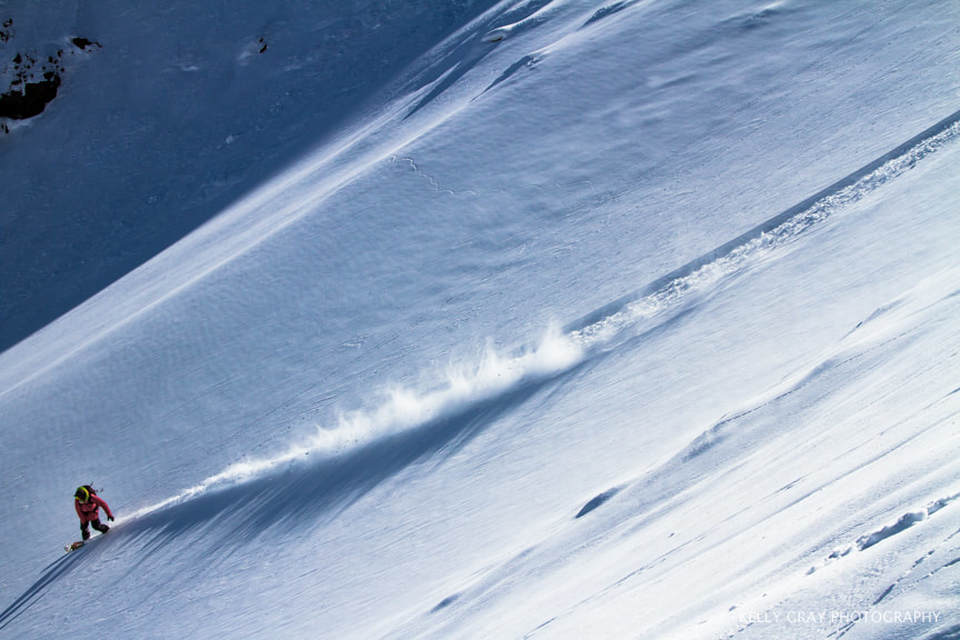 We peered out the living room window through a telescope spotting potential routes for our journey. All of the terrain we could see was protected from machines by the 495,204 acre Chugach State Park, and was a rare Chugach no fly zone. These acres were rich with wildlife and the local news reported moose tramplings. The grizzly bears in this canyon were of legendary Alaskan stature and we could see mountain goats teetering on the ridge lines. The peaks of this iconic range rise up to 8,000 feet above the ocean and we started our approach at the Eagle River Nature Center, sitting at only 500 feet. We felt very fortunate to have had a consistent snowpack all the way from the valley floor to the upper reaches of the mountains we were after. Zach, Kelly, Joshua, Ryan, and I slapped on our skins, swung on our heavy packs from the tailgate, and started walking into the wilderness.

We navigated the Eagle River valley in deep freshly fallen snow on the infamous Iditarod trail. To narrow the chances of having to cross the icy river twice, we held to traversing one side of the valley as long as possible. At the furthest bend, the canyon choked and we took out the trash compactor bags we had packed in to put over our boots. I held my splitboard over the shoulder with my poles pressed under my pack, held the bags up around my knees and awkwardly crossed the river. Kelly and Joshua brought flip-flops and laughed as they ran across the piercing cold river with frozen feet. As is often the case, the topo map made our route seem straightforward. Sure enough, these particular maps proved to be misleading and the Alaskan bushwhacking is on a whole new level. The sufferfest ensued as we left the valley and started up the Polar Bear drainage. The nearly 24 hour sun in the Alaskan summers make the climate quite tropical and the alder brush grows rampant at the lower elevations. We crawled through the thick twisted branches as they hooked onto our huge packs and skis making every step a literal “whip in the face” struggle for a thousand feet or so. Our slow progress was character building and once we topped out, everyone took a short sigh of relief and looked on towards the boulder field that would be the next leg of our journey. We meandered through the field, careful not to break a ski on the sloping gaps between rocks and when we crested the roll, we were finally on the glacier. 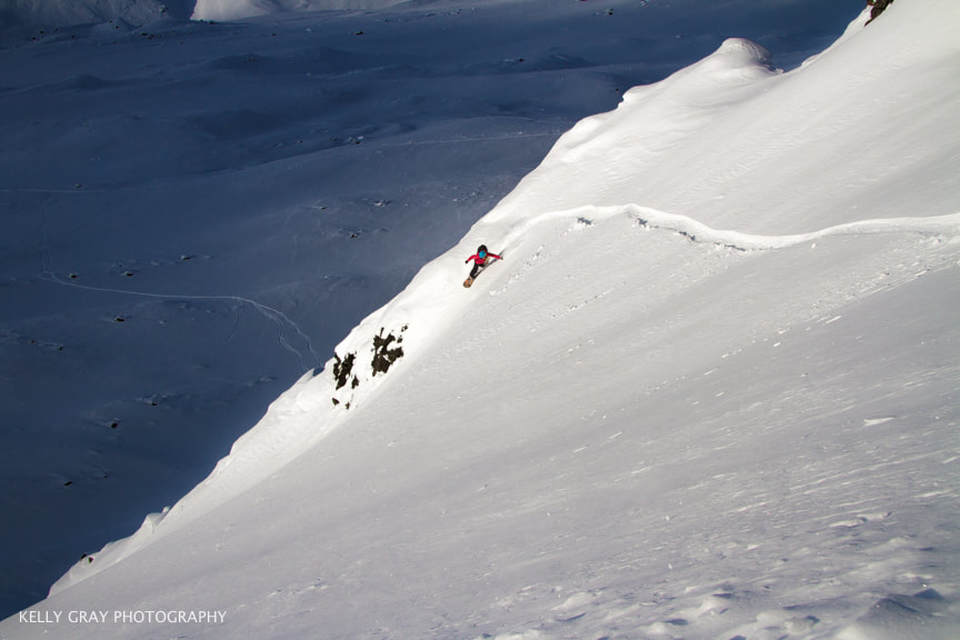 The nice thing about early sleep is that we were early to rise and we caught a beautiful alpine sunrise from the doors of our tents. We ascended into our breathtaking environment to assess the snow structure and get a good look at our objective. The surprisingly thin snow coverage in the area had us concerned with a weak snowpack and digging a pit confirmed a layer that was prone to failure. We promptly left the north facing aspect for another day and found a beautiful east facing line with a much stronger snow pack. The climbs were full of surprising views around every corner as the beautiful and rugged terrain unfolded before our eyes. At last, our descents were blanketed with the legendary Chugach powder we had been seeking so diligently. The pristine dry powder left billowing waves of snow lingering in the air as we laid down slashing carves into the massive mountain canvas. After those long days of glory pow shredding in our intensely cold environment, we packed up our belongings and headed back towards a warm bed and hot shower.

​After a day of thawing our frozen bones we had another Chugach drainage high on the priority list. This one was even more convoluted with logistical protection, always deflecting the masses of Alaskan heli skiers. Along with the promise of solitude and potential first descents/ascents, this place held gorgeous couloirs full of deep snow. However, Kelly’s friend Harry, a man we soon dubbed the gatekeeper, owns acres of the mountain at its base and so any sort of travel into the alpine passed through his property. Now if there is one thing not to do in the middle of Alaska, it would be to trespass on some mountainman”s land. He surely owns a gun and may just be waiting to use it. Harry’s land was difficult to approach; his cabin perched up top of a gated road with huge snowbanks, steep grades, and sharp turns. He greeted us as he stepped down off his snow plow tractor and Kelly introduced us. He said, “Oh, you’re the kids Kelly told me about.” The nick name stuck and Zach and I are locally known as “the kids” among our Alaskan friends. We laughed and thanked him for allowing the intrusion and he only asked that we put in some turns for him in return. 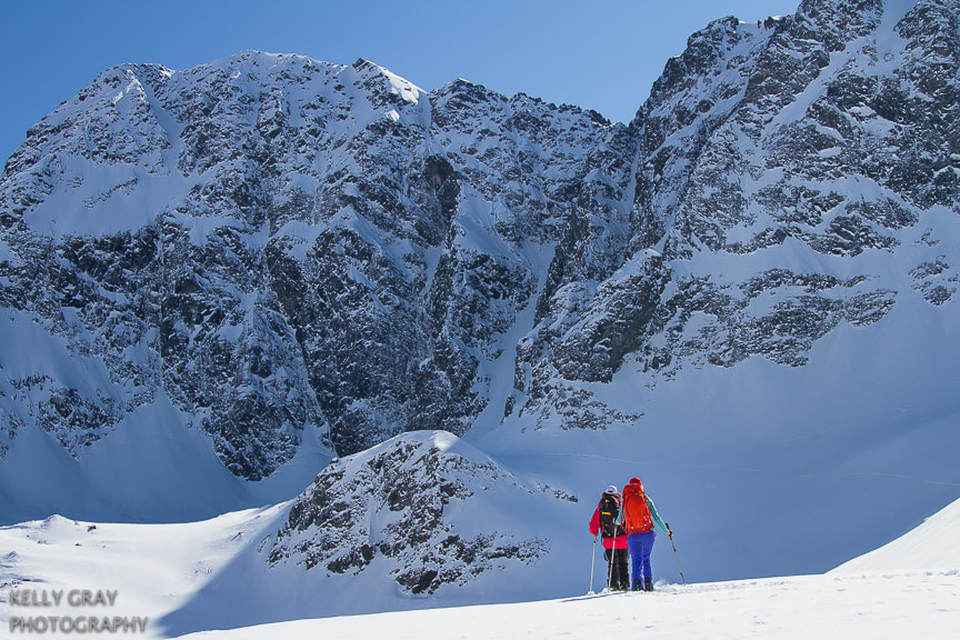 We climbed high above his homestead, past the tree line and into the far reaches of Ram Valley. The approach felt much faster without all of the camping gear we were lugging around before. One of my favorite things about skinning across big open expanses is the view. The plethora of rock lined couloirs in the area was astounding and we saw them all laid out in front of us, completely undisturbed. We chose to skin as far as was reasonable up the skirt and then booted straight up the line to preserve the snow for surfing. The snow firmed up in the middle of the chute so we put on our boot crampons and front pointed our way to the top where it got deep again with wind loaded snow. After a look at the snow structure, Kelly cut out a passage through the cornice lining the top of the chute. He perched himself up on the top of the cliff lining the side of the chute in hopes of getting a good camera angle. Zach and I then waited for him to summit as we sat in an alcove on the side of the line and then ascended to the peak after him. As we took the last few steps, the snow surface was so steep that we were literally rubbing noses with it. As we pulled ourselves over the ledge and onto the top, a massive view full of vast open space as far as we could see struck us both with pure wonderment.  Utterly distracted, we paused and took it all in. This was something I had dreamed of since I was a snowboard-obsessed kid watching all the shred movies in my pajamas and eating cereal after a day at Brighton Resort. Finally realizing that I was actually living my own personal dream left me with an overwhelming feeling. I had uncontrollable chills and a heart heavy with gratitude.

​I reassembled the two skis of my Voile Artisan back into snowboard mode, slid my bindings over my pucks, built a nice snow shelf, and strapped into my splitboard on top of a nearly 2,000 foot unnamed couloir. Dropping in from the top is always a nerve-racking ordeal when you cannot see much beyond the nose of your board due to the pitch. I trusted the “AK roll” having just climbed the same line and then proceeded to make effortless deep slashes in that Alaskan blower powder. The firmer snow in the middle of the line kept me on my toes and the run-out at the bottom allowed me to experience a max speed that I”ve only ever been gifted by the Alaskan wilderness. There are not too many words in the English language that can describe the feeling of riding a line like that but one word comes close. That would be flying.


A long walk back and we crossed the tracks of an Alaskan wolverine. His claws were so long that it left drag marks in the snow between steps. His trail went off and straight up a big face, we looked on in fascination. We crested the roll that would let us back down to the gatekeepers homestead and slashed our way out of the valley. The conclusion of our Alaskan adventure planted a seed deep in our souls and left us with a keen sense to one day return. 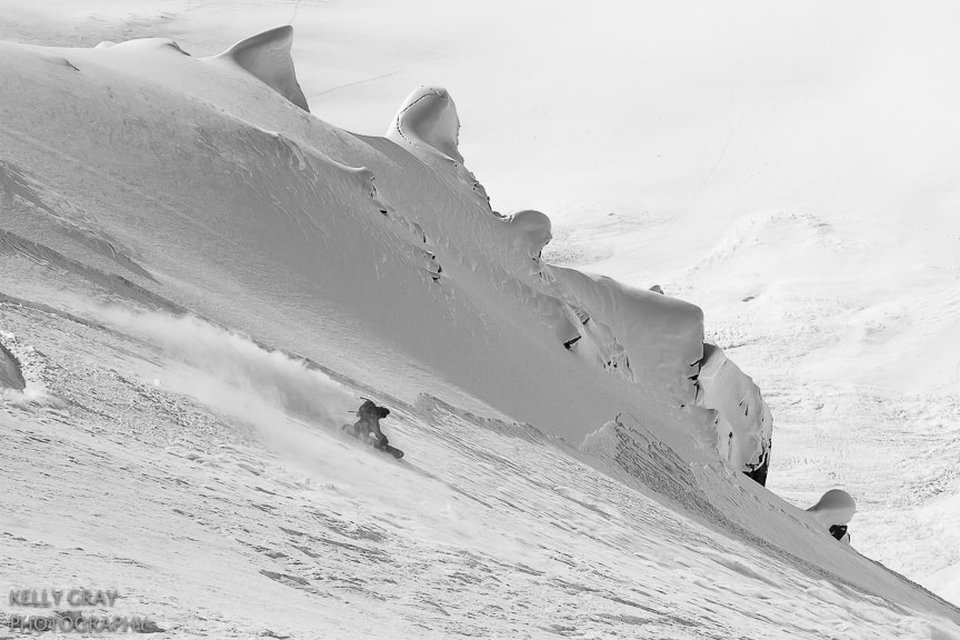